A Stable Toy or Welfare Improver? 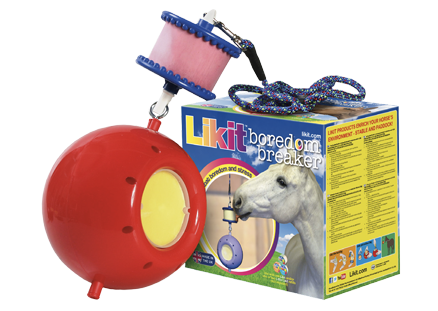 A student’s work at Bristol Veterinary School, supervised by Professor Christine Nicol the well-known expert on horse behaviour, set out to determine what effects if any, the Likit Boredom Breaker had on the behaviour and welfare of stabled horses. 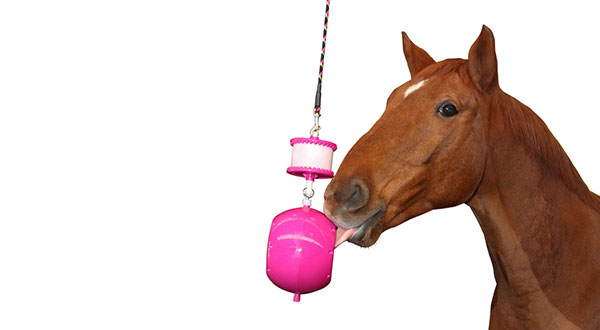 This device has recesses for holding ‘Likits’, blocks that are manufactured in different flavours and colours and that are designed to encourage horses and ponies to lick them.

The reasoning behind the design of this device was as follows. Stabled horses/ponies often demonstrate abnormal behaviours (indicators of compromised welfare) most easily recognised as the stereotyped activities of crib-biting, wind-sucking, weaving and box-walking. A less obvious abnormal behaviour is licking of parts of the stable such as the wall, food bowl, drinker, door, etc. This, like crib-biting, is an abnormal oral behaviour. It has been proposed that these particular oral behaviours occur because the horse/pony has not been able to fulfil its normal behavioural repertoire whilst stabled. As everyone knows, horses/ponies will naturally graze (feed) for up to 70% of every 24 hour period so this means they will spend between 14 and 16 hours per day feeding. Unfortunately most stabled horses are not fed ad libitum and, as a consequence, cannot fulfil their normal feeding behavioural needs. The result of this for many horses is that they then substitute abnormal behaviours to replace ‘eating time’ and this often takes the form of an abnormal oral behaviour. Thus, it seemed obvious to the technical team at Likit Products that if a product could be produced that would help to satisfy the horse’s feeding urge/drive/motivation then this would help to occupy the animal and thereby lessen the risk of abnormal behaviours developing or, for those horses already performing these behaviours, lessen the frequency of their performance. Having produced various ‘Likit’-holding devices, it was decided that the next step was to test their efficacy since the company sought an ethical basis for their products rather than just producing ‘toys’! An international research programme was launched in 2003 in North America (Cornell University) and in the UK at Bristol Veterinary School; the latter has been the first to report.

Environmental enrichment is a proven technique for improving the welfare of captive animals in Zoos, notably primates, big cats, elephants and bears but has only been tried in a very limited way with captive horses by either using a ball to deliver concentrates, or by providing a mixed variety of forages or by increased visual contact with other horses. Essentially, the Boredom Breaker is another way of enriching the stabled environment of the horse. Leisure horses of different age, breed and gender combinations, stabled for at least 18 hours per day, were used in the Bristol study. Horses that used the Boredom Breaker spent, on average, 7.5% of the time available licking the ‘Likits’! There seems to be a relationship between the activity of the horse (walking/oral activity directed toward stable) and the use of ‘Likits’; the more active the horse the more likely it was to use the device. It has been suggested that more reactive horses (say Thoroughbreds) are more likely to develop abnormal behaviours when confined than those of a more phlegmatic disposition (cob-like).

Those animals using the Boredom Breaker had lower heart rates compared to when it was absent from the stable although more work is required to substantiate this effect. Furthermore, the frequency and duration of walking was significantly reduced in these animals when the device was in the stable. It was concluded from the behavioural results that the Boredom Breaker has a positive effect on horse welfare by increasing grazing-type behaviour and by reducing walking. Thus, to describe the Boredom Breaker as a “stable toy” is incorrect as it implies that its use would be for play when in effect, its usage is more likely to be as a substitute (redirected behaviour) for grazing behaviour. The latter is highly motivated in the horse and if it is frustrated in the stable by the provision of a ration that limits feeding time, either because forage supplies are limited or, are partially replaced by concentrated feed, then the potential for the performance of abnormal behaviour is heightened. The use of ‘Likit’ containing-devices such as the Boredom Breaker can improve the welfare of these animals.

Back to The Science