This month has been quite quiet for both Prince and I, as my parents were away walking the West Highland Way in Scotland
We began with some British Dressage where we took part in both prelim and novice tests. In the prelim Prince did an attentive and obedient test to achieve a score of 65.38% which placed us 3rd, we then came 5th in our novice test. We are working and focusing more on our medium trot and canter, to gain the higher marks at novice level as Prince likes to keep all four legs firmly underneath him!

It was then time for our annual pilgrimage to Badminton Horse Trials. We attended on the grassroots day, as this is something I would love to qualify Prince for. It was great to see how the grassroots attracts such a variety of people. The day began with a look around the shopping village, admiring all the wonderful products available to purchase for yourself, your horse and dogs. We saw plenty of Likits on sale too! After drooling at the 7.5 tonne horse boxes for sale, we made our way out onto the cross country course to watch the final competitors tackle the 100 track. Some of the tricky combinations were made to look easy by the horses and riders. Myself and my Mum sat at the Shogun Sport Hollow, awaiting for the first competitor in the 90 to start, to while the time away we watched some of the 5* riders exercise their horses in the arena behind us. I thought the course was lovely and built to be challenging enough if the direct routes were taken. To finish the day, we had one last trek around the shops, this time to try and find me a new pair of long boots. Unfortunately, all the stands had run out of my size! Watching the grassroots riders compete at Badminton has made me even more determined to qualify!

A special day arrived for Prince on May the 6th ….. his 10th birthday!!! To celebrate this special day, he was treated to his new Boredom Buster which he definitely approves of!

To end this month we attended Borde Hill to compete in the BE80 Regional Final. It was a fairly humid day and Prince was not feeling the dressage test, this was not helped by a very frightening flower pot each side of the centre line at A. There were some nice moments between our disagreements and the judge agreed with us scoring 37! The show jumping was placed on undulating ground which Prince finds relatively easy having been bred in Ireland and brought up on a mountainside! We were aware time was tight as several combinations were getting time faults so I pushed on and we did a lovely clear. The cross country was beautifully presented, although all the competitors were talking about fence 6 which I thought was just a nice brush fence! We managed to redeem ourselves with a super clear and inside the time to be placed 9th! Being a regional qualifier there was a formal prize giving as well which was a great ending to the day. 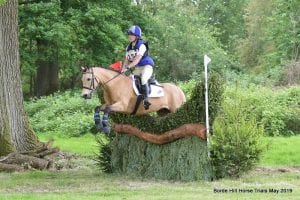 Until next month, Sophie and Prince xx