This month has been jam packed for both Prince and I. It began with us taking him flatwork schooling, where he produced some lovely consistent work. To help him work into a more consistent contact we have been practising sitting trot, which seems to be paying off. We also ran through the dressage test for Bovington BE. 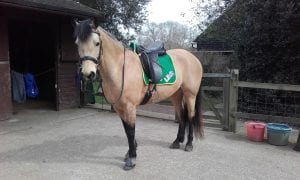 We then had a Pony Club show jumping rally. In this session we focused on angled jumps and jump off turns. Prince thoroughly enjoyed this, especially being allowed to go fast round corners! After this session we rewarded him with some carrot treat bar, which went down well.

Our first competition of the month was representing our Pony Club at a dressage competition. We were entered into two classes. In the first test we achieved 64.167% which placed us individual 4th and our team came 5th. Onto the second class, Prince was really listening and focused, we went on to produce a 68.409% test, this was the winning score, and our team came 2nd!

Before long, we were on the road down to Bovington BE90. We didn’t have too much of an early start, which I was thankful for! Having walked the cross country before my dressage, I realised how much more technical it was, in comparison to previous years! Prince warmed up beautifully and managed to keep it together for the test, to come out with a 30. On to the show jumping, we tried Prince in a different bit, which gave me a little more control. Unfortunately, we rolled a pole. I was looking forward to the cross country and so was Prince, so much so that we went too quick gaining 5.6 time penalties but finished with a super clear round! We came 19th out of a large section.
You can watch my full cross-country video here: https://youtu.be/OBwPgFLUwso 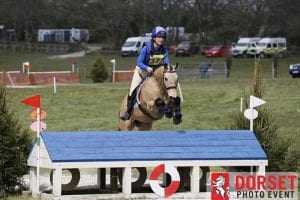 On Good Friday, we headed to Munstead Unaffiliated ODE to compete in the 80 section, with the hope to qualify Prince for the Connemara Pony Society Eventing League. We produced a dressage test of 28.3, followed by the most amazing double clear, inside the time to be placed 3rd! Prince even won his first prize money too. As well as this we qualified for the Connemara Eventing Championships, which are held at Broadway in October.

Until next month,
Sophie and Prince xx