To kick start November Cindy and I competed in the Busselton show where we had lots of fun. While we were getting her ready we used the Likit Boredom Breaker to keep her happy and occupied! Once we had tacked up and made her pretty we started off with our first class, the riders class. Cindy hadn’t been out showing for a while so she wasn’t too calm as well as there being bouncy castles blown up! In our second class which was the pony hack, Cindy was much calmer but still very stiff like she was in our first class. We ended up placing 2nd in both which, not going to lie, was a bit of a surprise after two rough workouts. We then had a few hours brake after our next event, show jumping. We only did 65cm and 75cm as we hadn’t been out competing for a while! In the 65cm, we had two perfect clear rounds and placed 2nd. In the 75cm round, once again we had two percent clear rounds and placed 2nd, nearly placing 1st. We had so much fun and we just cant wait for the new year be able to have fun like this every month! (We sadly didn’t get any pictures of the hacking). 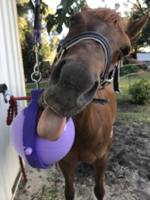 Throughout November, I have been working incredibly hard with Cindy schooling almost every day to get her flat work decent, which has actually paid off quite a bit! She is now way softer in the frame and can now make a few circles being supple and holding herself! But I don’t think we could have done it without rewarding her with Likit Snaks, Likit Treat Bars, Likit toys and the Likit Refills.

I haven’t really had the time to be working as much with Gary although he has improved so much since we first started! He’s stopped his bucking, rearing and he has matured, a lot! We’ve just been working on him getting out of our space, moving his hind quarters and front quarters away from us, desensitising and teaching him to lunge. I’ve also been doing some jumping with him and he still loves it! After a lot of work, it will all pay off!

Just wanted to let you know that most of my stuff has come, I’m just waiting on some more Big Likit Refills, Treat bars and some Likit Snaks! The ponies and I am so happy and grateful for everything we received! We love it all! Thank you so much x